After working with the Opal Mylar recently and posting the results online there were a few questions in regard to Angelina Film, Holographic Paper and Tavoos and because I had all of these products on hand I thought I would do a bit of test to see which one I like the best.

This is what I did:

*  Conditioned black kato clay and ran through the pasta machine on setting #2 so fairly thick.
*  Cut out small squares and placed a solid piece of each "film" on one square and then mosaic pieces on another - so each film had two examples.
*  Burnished to the clay slightly.
*  Baked in bench top oven on a tile for the recommended temperature for 30 minutes.
*  These are how they turned out.
*  All of these examples are on baked clay.


Holographic Paper
This is the stuff you can buy quite cheaply.  Florists use it, kinda like celophane but with a shimmering image (I think you all know the product I'm talking about)
Looked beautiful when it came straight out of the oven.  Edges curled a little but seemed to bake well, until I touched a piece of the mosaic and it popped off the surface. I'm not sure this product would withstand a heat gun either. 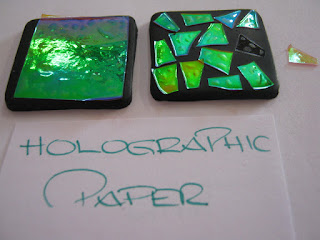 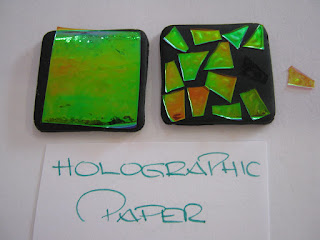 Tavoos Thick
I think you've all heard of this product by now.  If not just google and you'll find it. This one looked absolutely beautiful as it came out of the oven.  It seemed to bake beautifully to the clay.  The edges on the mosaic curled slightly.  When I went to see if it would peel off the surface of the clay it simply snapped.  This product would be perfect for a flat piece that was going to be covered with resin or something similar.  You'll note in the third pic I went to peel a little of the mosaic off and a clear layer came off the top leaving a shimmering piece underneath that I couldn't get off. 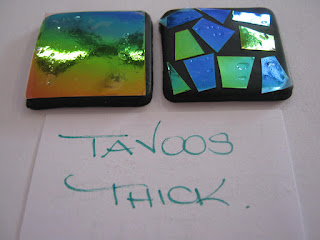 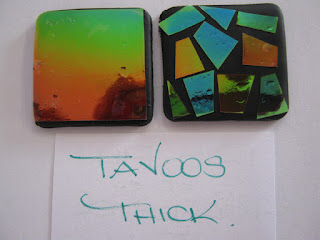 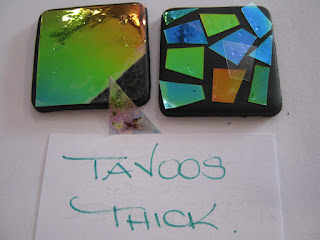 Tavoos Thin
This is just a thinner version of the thick stuff...obviously!!  This also looked beautiful when it came out of the oven - the solid piece that is.  The little mosaic pieces curled as you can see.  I also tried this on a pod bead and it totally didn't work.  I'm sure there are many applications for this product with polymer clay but not on a pod bead that's for sure. 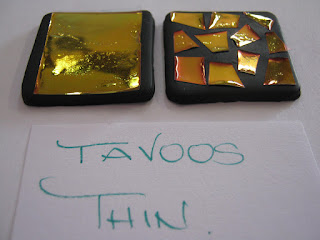 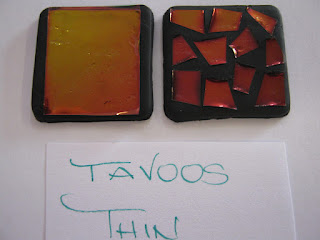 Fusible iridescent film is the raw material for Angelina.  This is a reasonably thin, shimmering paper that sticks well to raw clay.  It looked beautiful on the black clay both before it went into the oven and after it came out of the oven.  The edges did curl slightly and it peeled away from the cured clay very easily.  I dare say there would be some applications for this product with polymer clay if it was to be sealed after baking. 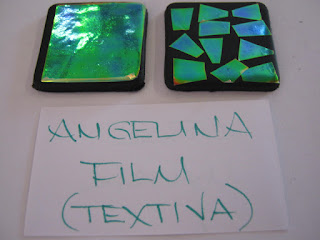 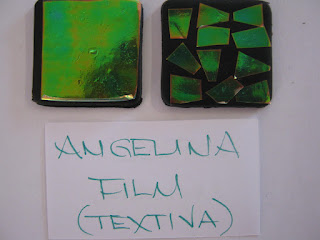 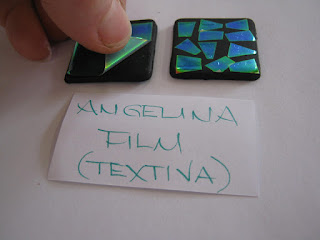 Iris Film or Polyester Film
This is a product I purchased many many years ago which, when I dragged it out, looked very similar to the opal mylar.  This is a wonderful highly reflective semi-transparent, silvery film  You can stitch on it and shape it and because it is polyester, you can use transfer paints on the surface as well. Again, very similar results to the Angelina Film.  This looked amazing after it was baked and didn't lose any of the shine whatsoever.....love it.  It did however, peel off very easily - bugger!! 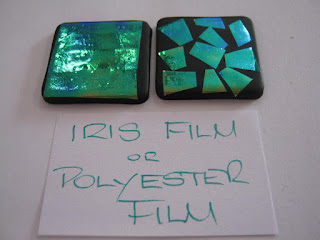 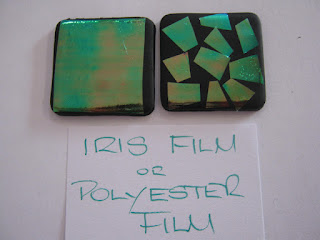 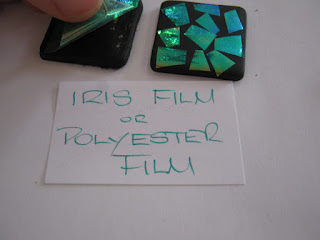 I did however, decide to try this on a pod bead to see if it would work similar to the Opal Mylar.  The mosaic pieces stuck beautifully to the raw clay bead and also baked beautifully.  I didn't try to pull the pieces off, instead let the bead cool completely, popped a skewer in the thread hole, applied liquid clay and cured it and the finished result was incredible. I tried to handle the mosaic pieces as little as possible and worked carefully so as not to pop them off the surface of the bead. 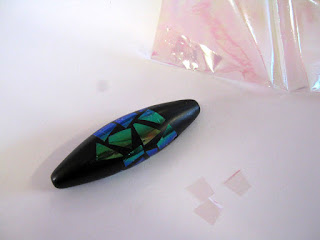 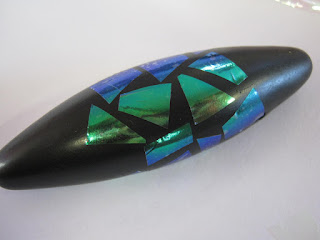 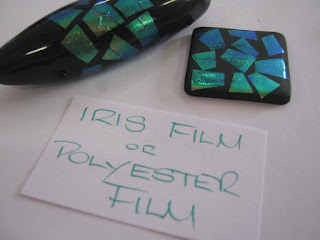 Opal Mylar
I think you possibly all know what this is by now.  This is my favourite of them all.  The film sticks to the raw clay beautifully, even on rounded surfaces.  It bakes beautiful, no curled up edges....and the best part I couldn't pick it off the surface of the clay when it had cooled down completely.  You'll see in the last pic I've tried to pick the film off the clay and it just wouldn't budge.  This is pretty awesome stuff I think. 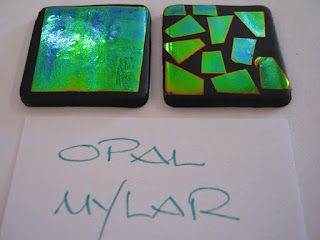 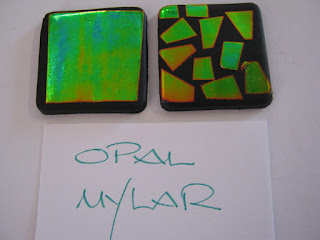 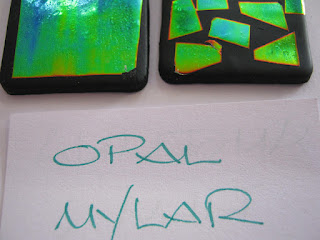 So there you have it.  Lots of different "films/papers" on the market and all would possibly work well, depending on the application, with polymer clay.